Two-wheeler production may significantly come down in November, as manufacturers and dealers sit on a huge inventory amid weak demand and a festive period that turned out to be a complete washout for the industry.The production schedules of two-wheeler makers suggest a 20-35% fall in output compared with both their earlier plans and the October output, according to people in the know. The situation may continue into December and cause the two-wheeler market to shrink in fiscal 2022 – making this the third straight year of volume decline for an industry catering to the personal mobility needs at the bottom end of the pyramid.

The tentative production schedules suggest an output of 1.35-1.40 million this month. That will be the lowest production in November since 2012, when the output was 1.27 million units. The month of November has historically seen sequential growth in production, show data – in seven out of the past ten year, it has grown 2-36%. Based on the current production schedule, however, product in the ongoing November will be as much as 28% lower than the previous month.

India’s largest bike maker, Hero MotoCorp, said on a conference call after the September-quarter results that its festive season sales declined by a low double digit due to delayed monsoon and harvesting. It expects demand to recover in the upcoming wedding season, citing multiple positive economic indicators.A TVS Motor spokesperson said the festive sentiment for two-wheelers had been moderate and there was softness in demand. An over 40% increase in prices in the last two years has impacted the buying decision of many potential customers in rural and urban India, the spokesperson added.

Hero MotoCorp spokesperson said the company has witnessed sequential growth in dispatches in October over September. While the first phase of the festive season was slow, the demand in the second phase saw an uptick. 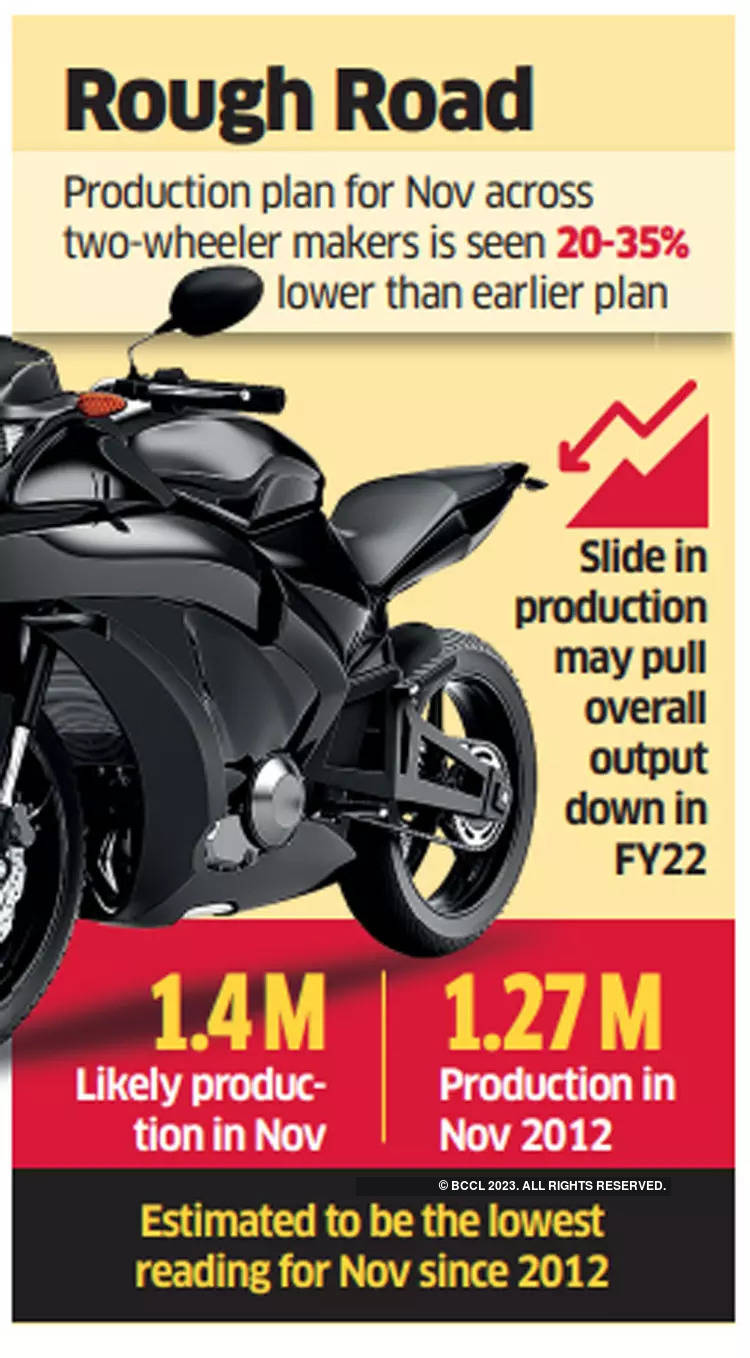 “Post the festive season, our inventory is around 5-6 weeks and with the delay in harvesting due to the late withdrawal of monsoon in many parts of the country and the ongoing marriage season, a pick-up in demand is expected,” added Hero MotoCorp spokesperson.

Honda Motorcycle & Scooter India and Bajaj Auto did not respond to emails seeking comment till press time Monday. Given the muted sales and high inventory at the dealerships, there may be only a marginal improvement in wholesale volumes for the rest of FY22, ratings firm ICRA said.

It forecasts the market to decline 1-4% in FY22 with the industry posting one of its weakest festive seasons in recent years, indicating consumer wariness at the bottom of the demand pyramid.

Increase in prices during the year and record-high petrol rates have kept consumers away from dealerships. Rural demand has lagged urban, possibly due to moderated sentiment in the farm sector.

“The domestic volumes of 8.05 million in the 7 months in FY22 are flattish on a Y-o-Y basis despite a severely contracted base,” the agency said.