The curbs are a part of the RBI’s “scale-based regulations” aimed at mitigating systemic risks.

New central bank rules might reduce the quantum of funds available with high networth investors (HNI) for bidding in IPOs. Leveraged bidding, which involves exiting the stocks following listing gains and paying back the financier, might reduce when the new lending limits are enforced.”The number of oversubscriptions in the HNI category will come down, which will benefit the price discovery process on the listing day,” said Dharmesh Mehra, CEO, DAM Capital. “Currently, those subscribers on leverage dump the stocks on the first day itself.”

To be sure, the new rules effective April 1 wouldn’t apply to the upcoming IPOs of Paytm or Nykaa.

The RBI set a framework for NBFCs, dividing them in four distinct categories, to bring regulatory parity with bank regulations. These are Base Layer, Middle Layer, Upper Layer and Top Layer. 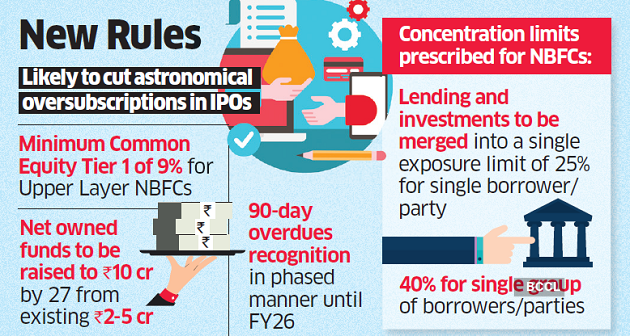 NBFCs marked as investment and credit firms, micro finance institutions and factoring companies will have to raise net owned funds – the sum total of equity capital and free reserves – to ₹10 crore by March-end, 2027, from the existing ₹2-5 crore.

NBFCs falling in the first category will now need to recognise bad loans following the bank standard of 90-day overdues. This will be done in three phases until the end of FY26. By then, those last-mile lenders will be on a par with banks in classifying sour assets.

“While this shall harmonize the prudential norms for these NBFCs with that for banks and other large NBFCs, what remains to be seen is how soon these NBFCs are also given the associated relief / benefits in matters relating to taxation and recovery like banks,” said Raman Aggarwal, Area Chair NBFCs, Council for International Economic Understanding (CIEU).The first category primarily entails non-deposit taking NBFCs with less than ₹1,000 crore in assets. The second category are all deposit taking NBFCs irrespective of asset size. The Upper Layer will comprise the top ten eligible NBFCs in terms of their asset sizes.

Depending on sudden risk factors, the RBI can move Upper Layer companies to the Top or fourth category, citing systemic risks.

“The extant credit concentration limits prescribed for NBFCs separately for lending and investments shall be merged into a single exposure limit of 25% for single borrower/ party and 40% for single group of borrowers/ parties,” the RBI said.

“It is felt that continued monetary support is necessary as the economic recovery process even now is delicately poised and growth is yet to take firmer roots,” Governor Shaktikanta Das wrote in the minutes released on Friday.

India’s foreign exchange reserves rose to $641.01 billion as of October 15, compared with $639.52 billion a week earlier, the Reserve Bank of India (RBI) said.

Porsche is out to reduce battery-making’s carbon footprint