So, when he found the person who stole his beloved dog, Darla, and discovered she was addicted to fentanyl, he knew what to do: pay for her rehab and help save her life.

In June, Morton was working in his home office in Cranbrook, British Columbia, while Darla, a 3-year-old Chinese shar-pei, lounged on the deck, soaking up the sun.

As he worked, Morton heard a loud noise followed by the sound of his gate being opened.

“I look out the window and I don’t see Darla anymore. I ran down the stairs and out to the deck, Darla was gone, and I saw a blue Ford truck back out and speed off,” Morton, 35, told CNN. 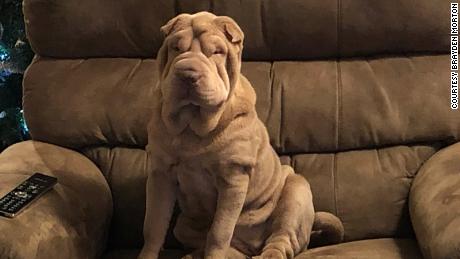 When Darla was stolen, Morton’s life stopped, he says — nothing mattered but finding her.

“I didn’t think I’d ever get her back or that I would see her again,” he said, holding back tears. “I thought she would end up being in a fighting ring or something worse. I thought she was gone for good.”

“I knew in my heart this person had Darla”

Morton called the police immediately after Darla disappeared. They advised him to start a search on social media.

He wrote a Facebook post, offering a $5,000 reward for anyone who would help bring Darla home. He received thousands of tips. Most, he says, were empty promises and attempts to get the reward money.

But then he got a tip he hoped would be real.

A woman said she had seen the same truck, an older model blue Ford, parked in the lot of an auto shop with a dog inside.

“So, I drove there and saw the truck and, long story short, Darla wasn’t there,” Morton said. “I was very worked up and being accusatory towards the gentleman who was in the vehicle. At the time I was sure it was him, so I wasn’t being kind.”

But a day later Morton received a call from a blocked number.

“I picked it up and all I heard was what sounded like a young lady crying,” he said. “I knew in my heart this person had Darla. I told her I wasn’t mad at her… and that I would grab the reward money and come to her.”

Morton called the police. Despite their attempts to accompany him to the meeting spot, Morton decided to go see the person alone so she wouldn’t get scared and try to run away.

When he got there, the first thing he saw was Darla. 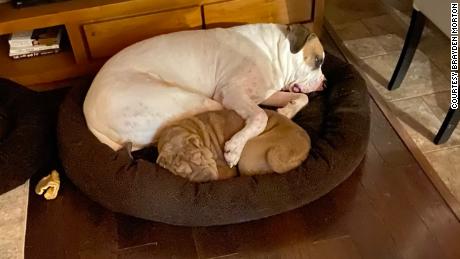 “The moment I saw her I just ran to her and picked her up. It felt almost too good to be true,” Morton said. “She was so happy to see me. We were so happy to see each other.”

But then, as he looked at the young woman who had taken his dog, he says he recognized an old version of himself in her eyes.

“She was very evidently hooked on drugs,” he said. “I gave her a hug and she said, ‘Why would you hug a piece of s**t like me?'”

Instead of giving her the reward money, for fear she would spend it on drugs, Morton asked whether he could pay for her to go to rehab.

She said yes and the pair hugged, crying together.

“They had a conversation and he got the dog back. There was talk of a reward,” Manseau said. “The owner did not want to file charges against the person who returned the dog. That person tried to implicate other people. However, we could not make that determination.”

His own battle with drugs

After growing up in Red Deer, Alberta, where he was surrounded by people addicted to fentanyl, Morton became involved in gangs and drugs.

He says he was addicted to fentanyl by age 24.

After trying to detox 16 times, Morton says he gave up and tried to take his own life.

“I was doing nothing good with my life. Everything was falling apart for me,” he said. “I had nothing.”

At one point, Morton, who was also a drug dealer, was held hostage, shot and stabbed, he says. He escaped with a machete lodged in his head, he says. After doctors successfully removed the machete, his only concern was getting out of the hospital and getting high.

“I needed to get high so I wouldn’t get dope sick. It’s the worst fear of any fentanyl addict, trying to quit and dealing with the withdrawal symptoms,” Morton said. “That’s where I was at in life.”

Days after the incident, as he was walking home and passed a pay phone, Morton remember the phone number of Tricia Hedrick, a family friend who was also a drug rehabilitation specialist.

“It was one of those moments people always talk about, like God trying to tell you something,” Morton said. “I just went over and dialed her number. When she answered, she said, ‘Brayden, your parents think your dead. You need to try getting clean one more time.'”

He planned to get on a bus the following day. But the night haunted him with doubts, he says. He thought he’d never get clean.

“I grabbed a bunch of booze, fentanyl and sleeping pills and that night I took it all. I told myself, ‘If I don’t die and somehow wake up, I’ll go to rehab.’ I don’t know how or what happened but I woke up.”

Morton says he quit drugs and never went back.

Paying for her rehabilitation and recovery

Despite his joy at reuniting with Darla, something inside Morton still felt broken.

After speaking with the young woman who had taken Darla, who asked to remain anonymous, Morton discovered she had been hooked on drugs since she was 16.

She had stolen Darla for $150 offered by people who were looking for a Chinese shar-pei, most likely for breeding purposes, Morton says she told him. When she saw the Facebook post of Darla, she told him that she didn’t have the heart to do it and stole back the dog for him. 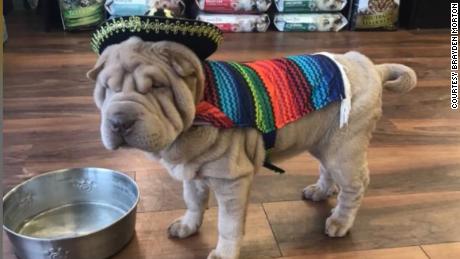 “I was so happy to have my dog back, but I was just so heartbroken by this kid,” Morton said. “It was just so screwed up.”

Susan Hogarth, the executive director in addiction recovery at the rehab facility, confirmed to CNN that Morton has put down a deposit to reserve a bed for the young woman and he will be paying for her medical and rehabilitation treatment when she arrives.

“As soon as she turns up, she will be flown by Westminster House into treatment,” Hogarth said. “She will be provided with medical attention immediately and medication to stabilize. We work regularly with Brayden who is an amazing support.”

Although he told the girl he had paid for her admission into the rehab center and even purchased her plane ticket there, she has canceled her admission at the center three times, Morton says.

“I did the same thing before,” Morton said. “It’s not an easy thing to do, going to rehab, but I’m not going to give up on her. She knows this offer will always be here, whenever she is ready to go, it’s paid and it’s a done deal.”

On the same day, as he was heading home, Morton caught a glimpse of the blue truck and the owner who he had mistakenly accused of stealing Darla. In hopes of apologizing, he pulled over next to him. 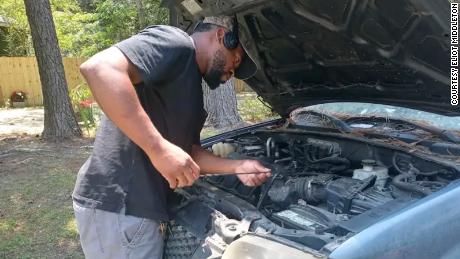 “I came here to apologize to you. I know it wasn’t you who stole Darla,” Morton told him.

To his surprise, the pair quickly became friends. The truck owner shared his own difficult story. He was homeless, having recently caught his wife in an affair. He decided to leave immediately — taking his two dogs and driving aimlessly until he found himself in Cranbrook.

As the two said goodbye and Morton was pulling out of the parking lot, he made a U-turn, returned to the man, and told him to follow him to a hotel where Morton would pay for him to stay the week.

“I just wanted to help him get his feet back on the ground,” Morton said.

With the help of some of his friends and their donations, they were able to pay for the man to stay at the hotel an additional week. He has now purchased his own trailer and obtained a full time job, according to Morton, who shared a photo of the pair together on Facebook.

Morton remains in contact with both people, who he says taught him invaluable lessons — and reminded him of how important it is to help people who may have no one else to turn to.

“It was very humbling, and actually, those people helped me too,” he said. “I was going through some personal stuff at the time and it was very emotional and they warmed my heart. I’m thankful for them.”