Goats and dogs were among the first animals to be domesticated by humans. Bone remains found in archaeological sites and advances in genetics have, over the last three to four decades, compelled archaeologists and evolutionary biologists to understand the process of this domestication.

Taking DNA from the remains of 32 goats that died some 10,000 years ago in western Iran, a recent study tries to ascertain the history of goat (Capra hircus) domestication.

Barely slept due to anxiety about this, but here goes: out now at PNAS (open access) is our paleogenomic-archaeozoological study on goat from the Zagros Mountains, ~10,000 years ago.
A thread (gulp) [1/n]https://t.co/qO1ckX7y63

Domestication was one of the key moments in the history of humanity that propelled human societies towards urbanisation and sedentary agriculture, a marked transition from the hunting-gathering lifestyle of the Palaeolithic. The Neolithic period (10000 years ago) associated with domestication has been the subject of research for archaeologists, anthropologists, and biologists alike.

The four sites from where the assemblages were sourced are located in the Zagros mountain ranges that run from the Iran-Iraq-Turkey border in the North West to the Straits of Hormuz in the South East. These four sites are Ganj Dareh, Tepe Abdul Hosein, Asiab, and Ali Kosh and date to 9600-7000 cal BCE. Most of these sites have been subject to regular archaeological excavations since the 1960s.

Usually, animal bones recovered from an archaeological site are classified according to sex (female/male) and age (juvenile/subadult/adult, etc).

The cull profiles or harvest profiles tell us a lot about the management practices of the animals. Under most goat/sheep management regimes, males are culled at a very young age (18-24 months) and herders maintain a stock of only a few males for breeding. Females are culled at a later age, only after the peak reproductive years. This is very much reflected in the bone assemblages of goats from Ganj Dareh and Tepe Abdul Hosein.

An interesting find was that of hoofprints in a mud-brick recovered from Ganj Dareh, indicating the management of goats at the site. 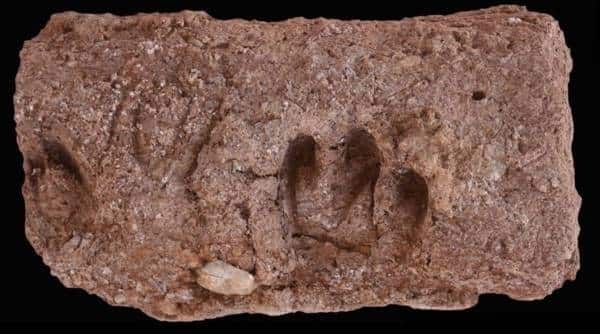 Kevin G Daly, Research Fellow in Trinity’s School of Genetics and Microbiology and first author of the paper, said in a release: “This first livestock keeping shaped the goats’ genomes. There were signs of reduced Y chromosome diversity – fewer males were allowed to breed, leading to an increased tendency of relatives mating. Surprisingly, the Zagros goat appeared to not have undergone a population bottleneck often associated with domestication and lacked strong signals of selection found in later domestic goats.”

The nuclear DNA was compared with those from wild populations as well as later domestic populations. It was found that the closest wild relative of these domesticated goats was the bezoar ibex, a species extant to this day in the region. Most genomes from Ganj Dareh and Tepe Abdul Hosein bear a close resemblance to other ancient and modern goat genomes from Eastern and Central Asia.

However, the story of domestication is far from linear, with multiple centres of domestication spread across space and time. It is a story that is made even more complicated by human-mediated introductions of populations to newer parts of the world that resulted in newer varieties.

As the study suitably demonstrates, Western Iran, part of the Eastern part of the Fertile Crescent, and one that was considered somewhat of a ‘domestication backwater,’ could be a worthy contender as a centre of domestication for goats. ‘Ancient genomic data…indicate[s] that the eastern Fertile Crescent was one of three regions key in shaping the Neolithic goat gene pool,’ the paper adds.

– The author is a freelance science communicator. (mail[at]ritvikc[dot]com)