Fashion designer Sanjay Garg was born in Sariska in Alwar where, in 2005, all 17 tigers went missing, as reported by a wildlife committee that was set up by the Rajasthan government. The shocking incident, which was called “the biggest wakeup call in the country’s conservation history”, carved deep into what Garg calls his “sleeping consciousness”. Little did he know then that 16 years later, he would be designing a collection in collaboration with Anjali Singh, co-founder and creative director of Sujan, dedicated to ‘Sher Bagh’, the delicate but life-sustaining balance and coexistence of nature and wildlife that got tipped off somewhere in history.

In Anjali Singh’s words. “Sher Bagh salutes the inherent and intrinsic connection of the human species with its natural environment and diverse habitats. It is a connection that is fraying at the edges but one that can be revived.” The Sher Bagh collection by Raw mango and Anjali Singh.
In conversation with indianexpress.com, Garg shared his inspiration behind Sher Bagh, how he thinks the harmony between humans and wildlife got dented, and why he is always reimagining what his brand stands for.

Anjali Singh, too, shared with us her vision for the collection, collaborating with her long-time favourite Raw Mango, and how she has seen the wildlife landscape change in Rajasthan.

Tell us about Sher Bagh. How did the collection come to be?

In Indian textile vocabulary, we have so many animals — monkeys, tigers, parrots, and Anjali has been collecting those textiles herself. Over the last many years that we’ve been meeting, she has expressed her interest (in curating a collection). After I stayed at Sujan in Jawai, I came back completely awed because it was so beautiful. I told her, “let’s do something together”, and that’s how this story came together.

What I was interested in exploring was the shikargah in the Mughal era when the paintings of the time showed the ruling men taking power over the animals. And when the British came, it almost became a marker of social stature that everyone had to kill a lion or a cheetah and have a photo. It was like a jewel in their crown. Of course, hunting was later banned in India. But as I always say, traditions are great, but do we have to show the same visual imagery where animals are shown as killed by man? What is the present-day context of shikargah? What is that visual imagery? How do we present the human-animal relationship today? In a way, it’s kind of exploring, creating awareness, and also finding out what that relationship is like. This is what excited me in terms of the textile, the way I look at society, my commentary, and expression. 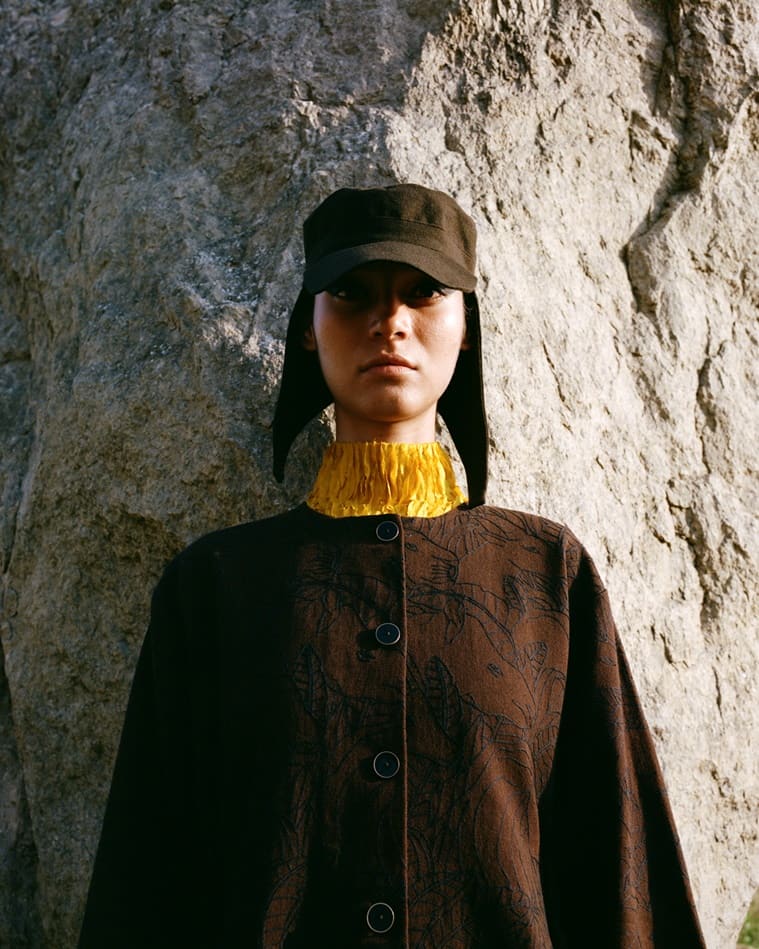 The Sher Bagh campaign.
What made you want to collaborate with Anjali Singh?

We all know certain things, but it is interesting to see when someone comes with expertise in it. Like her, who has spent her last two decades in jungles and working in conservation. Her uncle, Valmik Thapar is an authority on tigers. And while I was aware of the bigger issues, I wasn’t aware of the numbers, what has been done, I didn’t even know there’s a leopard in Jawai! Also, Anjali went to Central Saint Martins, so it was interesting to work with her on this collaboration.

Sher Bagh talks about co-existing with nature and wildlife, a philosophy that is inherently ingrained in us Indians, and the way our ancestors have led their lives. Where do you think that balance tipped off, and why?

We actually figured it out long back, I think. Jainism and Buddhism preach a culture which respects animals. As for me personally, I don’t eat animals for my food, something that people had already been practicing for many thousand years. As the fabric of society, culture, and geography changes, a lot of influences change, too. There are a lot of invaders who have come with their own ideas, including the British. At the same time, I do not want to generalise this image of the past because there are also many people and communities who have been involved in wildlife conservation.

There are always good and bad people. When invaders came, the killing of animals became a thing of pride. When you live in those times, you don’t even know what you are doing wrong in the moment. Like climate change, for hundreds of years so much happened, and suddenly we are trying to wake up. So, I don’t really know whom to blame.

I come from Sariska in Alwar, Rajasthan which is one of the worst examples of this. We lost every single tiger. We had such rich wildlife, and we just took that for granted. That had an impact on me growing up. It was in my sleeping consciousness. 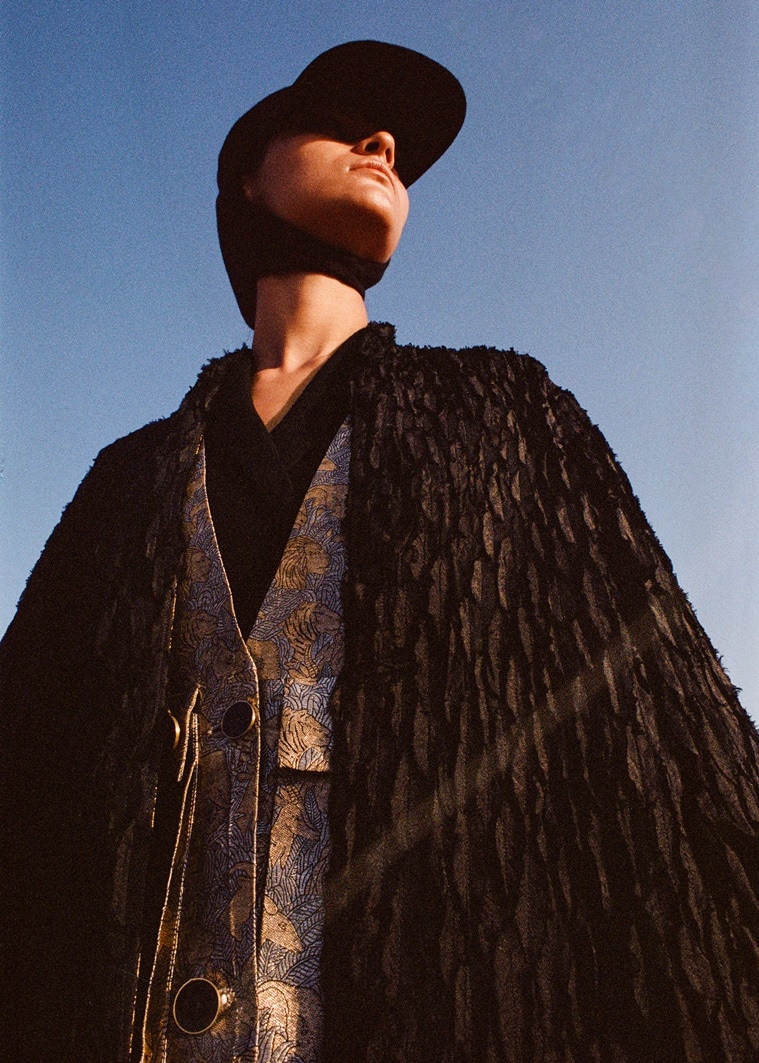 Silk has been used too create a fur like texture.
How have you translated the inspiration behind Sher Bagh into the tangibility of the pieces?

We looked at a lot of things for understanding and translating the inspiration – the Vedas, the Quran, Tantric texts, Buddha’s texts, and other sources. There I read that we are one of the animals created by God, and that stuck to my head. We came up with textiles where you see human representation submerged in it. We made a stripe that resembles those of a tiger as well as the veins of a leaf. The idea was to keep nature, human, and animals on the same pedestal, in a way.

The garments are perfect for Safaris, albeit with a touch of luxury to them. We have created a throw-over that you can put on during open-jeep safaris. We have also developed a texture which looks like fur from far but it’s actually silk.

The Shikargahs and the presence of communities like the Bishnois in Rajasthan presents a contradiction in our treatment of wildlife through the ages. Why do you think that has been the case?

Sher Bagh weaves into its narration eleven animals. Can you elucidate?

We included the animals that the Sujan family is involved in conserving as well as some of the most popular at-risk ones like elephants, rhinos, tigers, and the pangolin which is highly endangered. The graphics also convey the message that there’s a bagh when there’s sher, and vice versa, which is to say that they complete each other, nature and wildlife, and you cannot look at them in isolation. 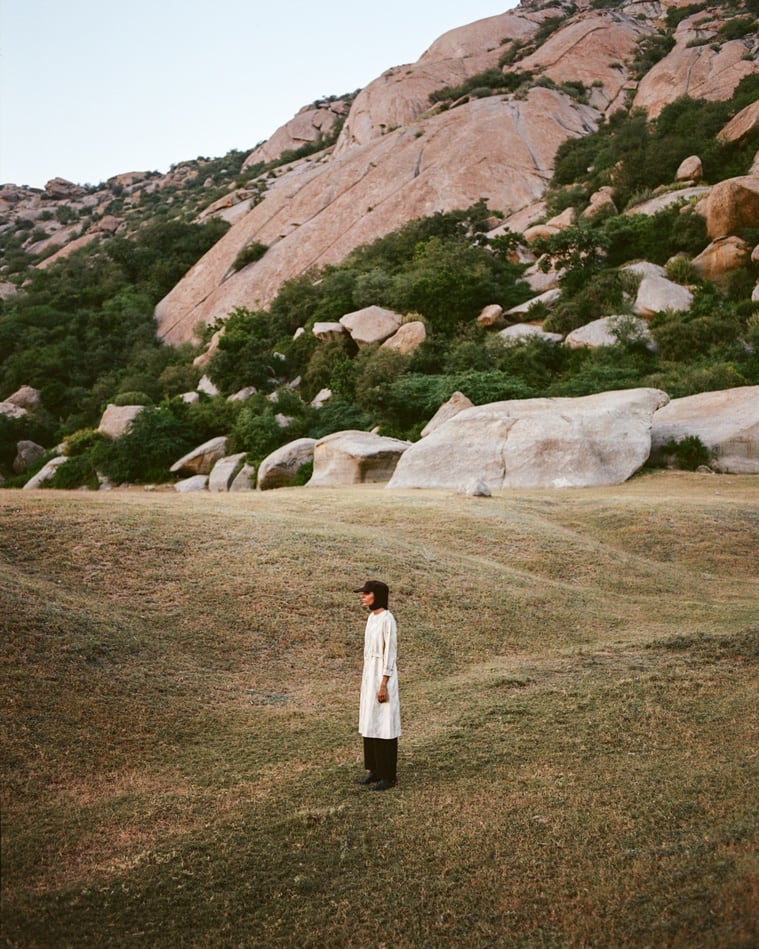 The Sher Bagh campaign.
Raw Mango’s connect with Rajasthan is now an established one, with Moomal and now Sher Bagh. What draws you to the state for inspiration?

I am not from Rajasthan but I grew up there. I did my schooling there as a kid. While I don’t know if I can put it on a table and dissect it, but I know that I have so much to tell about our country, and specifically Rajasthan because I have lived there and observed it closely: be it the folk music, culture, weddings, wildlife, or even the food from there that I am so interested in. So there’s a lot that deserves to be explored.

Sher Bagh is rooted in a concept and inspiration different from what we have seen from Raw Mango in recent history. Are you envisioning a different, reimagined future for the brand?

Always, and if you don’t feel it, I wouldn’t want to create that way. For my previous collection ‘Romantics’, people said ‘oh, there’s a French influence’. But I always say that India is not one India. I come with different ideas of India and you cannot impose one idea on anyone. I think as a brand, I don’t want to stick to a particular inspiration or just lehengas and saris.

How was your experience turning into a creative collaborator from one of the early patrons of Raw Mango?

It has been a wonderful journey, I have learnt so much about the design process of Raw Mango’s work and all that goes into creating just one single garment. It has been fascinating and enlightening and brought a lot of joy.

What was your vision for Sher Bagh?

The vision for this collection was to bridge design and conservation — two things close to my heart — together to form a message through the medium of fashion and textile. To come together with Sanjay to create a collection that celebrated the wilderness whilst exploring new forms and imagery for the textiles and safari wear that I believe this collection embodies.

Having lived through the most challenging months in recent decades, we strongly believed that this collection would symbolise and celebrate the resilience of life on planet earth, and make a statement on the imperative, critical balance needed for the survival of humankind and our inheritance of a fragile, natural world. Sher Bagh salutes the inherent and intrinsic connection of the human species with its natural environment and diverse habitats. It is a connection that is fraying at the edges but one that can be revived. We believe Sher Bagh will inspire fellow travellers to reconnect with their true inheritance, with the wilderness and the wild, to redefine their priorities, their lives, and their living patterns.

Your family has a legacy of conservation in Rajasthan wilderness. How have you observed it change over the years?

The pressure of the human population has had its toll on the natural resources of our planet all over the world and it is the same in India. However, with correct, and timely intervention the tiger population in India has grown, especially in Ranthambhore, Rajasthan which serves as a good example of protection and its positive results. Any wilderness protected revives fast becoming a garden of Eden for many unique species and flora and fauna.