Amazon Prime Video’s latest anthology Putham Pudhu Kaalai Vidiyaadhaa feels fresh, breezy, and much lighter and grounded than Putham Pudhu Kaali (2020). The purpose of this anthology series is to nudge us to find a silver lining during trying times. The first edition explored the positive side of the pandemic by reminding us that it brought the family closer under one roof, offering an opportunity to start a dialogue and clear emotional barriers caused by a stressful modern lifestyle. The common theme of the five stories was opening up our hearts to fresh perspectives, opportunities, relationships and second chances.

The theme of the second edition is all about coming out (of the closet). It is about removing the masks we wear to live up to society’s expectations, acknowledging our own vulnerabilities, forgiving ourselves and others, and thereby claiming one’s rightful place in society. While most of the challenges tackled in the first season felt a little hard to connect with, the latest season explores some of the biggest existential problems of our times.

Balaji Mohan’s short film begins with three constables guarding a check-post near a posh residential area, where people still refuse to abide by curbs during the second lockdown. Youngsters want to step out, old people refuse to wear masks because they believe ‘corona’ won’t catch them, and some men — drunk on power and alcohol — drop names and expletives to undermine law and break restrictions. It comes down to three lightweight constables to protect the sanctity of the lockdown. Balaji could have just made a movie about the kinds of people and challenges that these cops deal with in the line of duty, and it would have been far more engaging than this. The sub-plot of a love story and cops circumventing the rules to help a couple elope feels forced and clumsy.

Lijomol Jose, who delivered a powerful performance as a tribal woman fighting for justice in Jai Bhim, plays the role of a girl who is struggling to earn an honest living in modern Chennai. She seems to belong to the class of contemporary actors like Vijay Sethupathi, Sai Pallavi and now Guru Somasundaram, who can make any scene work for them, even in a bad film. That doesn’t mean The Loners is a bad movie. Director Halitha Shameem keeps it real by mining the wisdom of an outsider in Lijomol’s character, who looks down upon people who fail to acknowledge that our reality has changed with the pandemic. She is irked by everything that fuels “toxic positivity” that even robs us of the opportunity to accept the things we have lost, mourn them and move forward in life much wiser. Lijomol especially excels in channelling the nervous energy blended with sheer excitement when she meets her online friend, played by Arjun Das, for the first time. 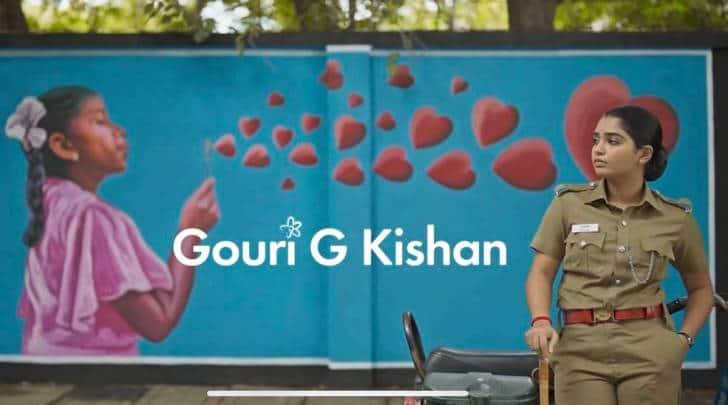 Filmmakers like Madhumita understand the freedom that comes with the OTT platforms. Unlike television and movies, it provides a space for ambitious filmmakers to experiment with themes, style and forms. Mouname Paarvayaai stands out for being silent in this ensemble of short films. It is safe to assume that middle-aged husband and wife, played by wonderful actors Nadiya Moidu and Joju George, had a bad fight, which even turned a little violent, driving a huge wedge between them, just before the lockdown. The lockdown, however, forces the couple to stay put in the house and tolerate each other. And the set-up sort of provides a compelling opportunity for Madhumita to stage a film without dialogue. Within 30-minutes, Madhumita shows us the complex relationship between the couple. Nadiya Moidu and Joju George make for a perfect seasoned couple, who seem to hate and love each other in equal measure.

This queer film brings diversity to an already refreshing set of stories. The lockdown has kept a man apart from his love. We know he’s been talking to his lover and repeatedly making excuses to bring his lover to his parents. We are sort of hard-wired to think that the lover is a woman. Director Surya Krishna uses this naivety of ours to pull the rug in the most elegant way possible. Yes, it is about the man coming out of the closet and revealing his true self to his parents and the world. And for that to happen, first he has to come to terms with his own sexuality. We also see another key male character in the movie, who is hiding behind his macho-personality, which prevents him from experiencing and expressing his vulnerabilities.

Richard Anthony’s protagonist, played by Aishwarya Lekshmi, is a strong believer in stoicism. Instead of dealing with the difficult task of having a difficult conversation with her loved ones and sorting out her emotional problems, she prefers to bottle up all her feelings and push away people. The film follows her inner journey in the aftermath of her father’s sudden demise, which triggers a chain of events and uncorks pent up emotions, eventually allowing herself to make peace with death, life and everything in between. Unlike other movies in this anthology, however, this film needs one to invest more emotionally to understand where the characters are coming from.